My best to Gene “Duke” Babb’s family and friends on the week of his passing. Happy birthday Wayne Whitmire. This one’s…………..for you.

Hey, it’s Wayne Whitmire’s birthday today! HBD Wayne from down here in Austin. Whitmire might be celebrating with Dana at the AC Pub ROOts / AC AlumNight in Plano this evening alongside other Roos. This month Roo Tales is looking back at the 1968 AC football season on its 50th anniversary. And what a coincidence! Whitmire birthday today is number, errrr…………. today Wayne turns, uhhhhh……….he’s 29, ok? We’re going with 29. Whitmire turn 29.

One thing you should know about Wayne Whitmire. He’s a man of tradition. In fact, that’s one thing we have in common. There is pride in the past. If an institution has a good story to tell, then it will be embraced wholeheartedly. That’s one of the reasons he’s such an asset for Austin College. Wayne is a valued member of the AC Alumni Board, and is always ready to tell anyone willing to listen why that nearly 170-year old school is unique in Texas.

Tradition is also a reason why he is a huge fan of America’s team: The Dallas Cowboys.

How much does he treasure the Cowboys? Here’s how much. He’s actually pleased that the Cowboy haters have their hate to give them at least a modicum of joy in their lives. It’s almost like a gift he is happy to provide Jaguar fans who will never know the pleasure of rooting for football royalty. A giver like that surely deserves a gift on his own birthday, don’t you think?

In 2014, my daughter and I headed to Casa de Whitmire to watch the Cowboys take on the Packers in the NFL playoffs. Late in the game Tony Romo found Dez Bryant on fourth down for a score to take the lead.

Sure, the refs ruled it incomplete because of a ridiculous rule. But hey, we all know what we saw. Dez went up and got it. The NFL has since modified its rules so that catches of this nature will be ruled complete in the future.

Whitmire and I both graduated from Austin College in 1992, and after Sherman he departed for Dallas. There, alongside Chris Medlin, Kevin Pittman, and Scot Martin, he was part of an exclusive Cowboys watching group that did not tolerate bandwagon fans in their midst. They were rewarded for their loyalty with a Super Bowl Championship in 1993.

Coach Jimmy Johnson famously said that he knew the title would come after the victory at San Francisco. After the 49ers had pulled to within a score and needed a stop, Troy Aikman found a speedy Alvin Harper open on a gain that took the Cowboys deep into San Francisco territory. Three plays later, Aikman hit Kelvin Martin for the game winning score.

Wayne and the others still talk fondly of 1992-93, but nothing beats the memory of childhood. When we were both kids in 1978, we watched Super Bowl XII on old televisions with poor reception. The Cowboys were there in the Superdome, looking to secure championship #2 against the Denver Broncos.

The Broncos kept it close in New Orleans, and were still only down 10 late in the game. That was, until Tom Landry’s crew put the game away. The championship clincher came on a trick play: a throw from fullback Robert Newhouse to Golden Richards.

Austin College Kangaroo legend Gene Babb passed away this week. Babb’s football years in Sherman from 1953 to 1956 were so impressive, he attracted the interest of NFL scouts. San Francisco decided he should head out west, and Babb signed a contract to be a 49er in Hughey Gym. Over two years in San Francisco playing alongside Y.A. Tittle, Babb had nearly 500 all-purpose yards and three touchdowns.

Babb finished his career in 1963 after two years with the AFL’s Houston Oilers. Houston had switched Babb to the defensive side of the ball; as a middle linebacker, he recorded an untold number of tackles, picked off four passes, and even returned one interception for a TD.

Yeah, but it’s the middle of the career which this post is about.

America’s team was born in 1960. General Manager Tex Schramm hired Texan Tom Landry to coach the NFL’s newest expansion team, and began the work of filling a roster via an expansion draft. One of his early acquisitions was a Texas boy from Odessa playing out in San Francisco: Austin College Kangaroo Gene Babb. The Dallas Cowboys played their initial 1960 season in the Cotton Bowl.

The Cowboys were playing the Philadelphia Eagles on September 30, 1960 at the Cotton Bowl; it was the second Cowboys game in franchise history. Late in the game, Dallas QB Eddie Baron took a snap on the Eagles 27-yard line. He rolled right, found his target, and heaved the pigskin down the sideline. Gene Babb hauled it in and raced across the goal line for the score.

In fact, it was the first 4th quarter touchdown catch in the history of the Dallas Cowboys.

Last year, I went looking for that 1960 touchdown catch. I purchased a 1960s Dallas Cowboys highlights video from Jerry Jones’s little online shop with the hope of finding Babb hauling in that pass. Unfortunately, it was not a part of the season review; the search for that TD catch continues. However, Gene Babb’s #33 Cowboys jersey does appear throughout the highlights.

So I got another idea. Knowing Babb was in failing health, I’d make a tribute video and tell both Babb’s Cowboys story alongside Whitmire’s Cowboys fandom at an appropriate time to honor the greatest Austin College football player ever. The fates determined that Babb’s passing would be on the same week as Whitmire’s birthday. The tribute video shows every play in which Gene Babb’s #33 makes an appearance during the inaugural 1960 season of America’s team.

Gene “Duke” Babb is appropriately honored on the Louis Calder stadium scoreboard. While many Roos have flirted with a professional career since World War 2, and while a few have even briefly signed for a year or two with a squad here or there, only one actually made a career in the NFL. While I never met Mr. Babb, I know many of you reading this did. His success on the field and coaching off the field made us all proud to be Roos.

Austin College fans are Dallas Cowboys fans. Both AC and the Cowboys are Texas institutions. We all have a love of and devotion to that school in Sherman and that team in Arlington. But on these two scores, nobody can hold a candle to Whitmire. Wayne Whitmire is a man of tradition. There is pride in the past. If an institution has a good story to tell, then it will be embraced wholeheartedly.

My best to Gene “Duke” Babb’s family and friends on the week of his passing. 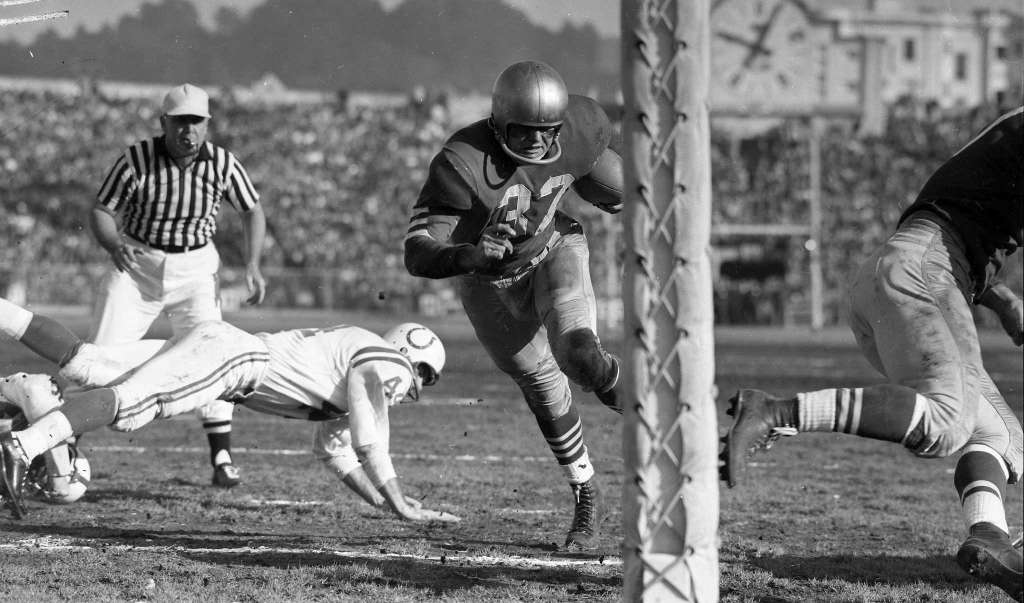 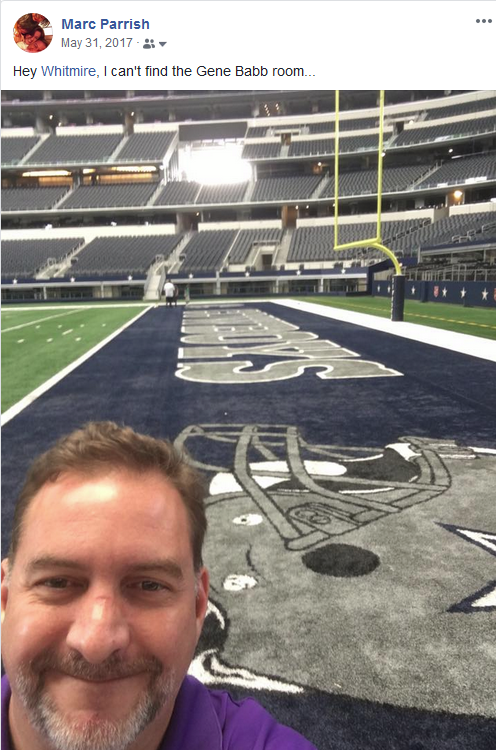