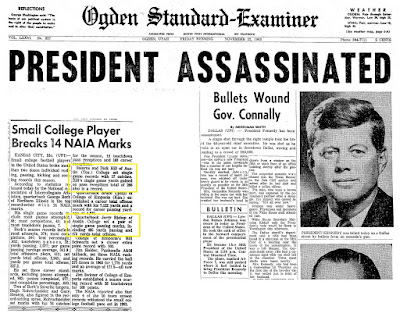 Nobody could stop Jerry Bishop and Dick Hill on a clear November day back in 1963. The Kangaroos met East Central Oklahoma at Louis Calder Stadium for the last game of the season. The All-American QB Bishop and his WR Hill went to the air early and often all game long. No matter the route, the football refused to hit the ground.

Hill “caught them behind him, diving, off his shoetops, over his head, one handed twice (left and right), and accidentally.” And none of these catches were the highlight. Late in the game, Bishop threw to another receiver, but the ball was tipped. “Hill had just made his cut, and was not watching for the pass, when the ball, falling short of Robertson, hit Hill and wedged in the crook of his elbow. ‘I didn’t know the ball was coming. I didn’t know I had caught it, and the folks in the stands thought it was just a great one-handed catch,’ Hill laughed years later.

By game’s end, Bishop had thrown for 495 yards. Hill’s 17 catches accounted for 266 of those 495 yards. Both were NAIA single game yardage records (since surpassed) for a quarterback and receiver. Both were AC football records as of 1996, and likely remain records today.

1963 was a year when NAIA records were falling left and right, and newspapers across the country reported the record breaking pace later in the month. Bishop and Hill were included on the wire service piece. The Ogden (UT) Standard-Examiner decided to run with the article on Page 14 of a special, November 22, 1963 late edition. I doubt it was read, as few probably made it past Page 1.

Wayne Whitmire reminded me that intelligence files on the JFK assassination were being released this week, and whether I might dig into the files to find some secret Roo Tale lying within. Ironically, the files are being released today because of legislation provoked by Oliver Stone’s movie “JFK”, which was released when we both were at AC. Has it been 25 years already?

But that’s not really me. When it comes to the events after that sad day, I struggle with interest. This is due to two irreconcilable facts:

There’s no good way to square that circle. So we’ll just have to leave it at that. Besides, I have a bias against conspiracy theories. On this topic I am by default with Costner’s speech to Susan Sarandon in Bull Durham. Y’all will have to read the files and make your case. Even though all of your credibility is suspect. 😉

But I won’t pass up the opportunity to link that day in history to some mini Roo Tale. For this y’all can credit (or blame) Wayne.

Now if the files reveal that Trinity is involved in some nefarious way, I am totaling buying that. See y’all at Barbaro’s and the game on Saturday 11/4, if you are headed that way. I’ve got a little something written for the occasion.