The Great Depression took a toll on both Austin College & Trinity University. AC was barely able to scrape by thanks to some huge sacrifices and very creative financing. Trinity, located in struggling Waxahachie, fared much worse. To combat the crisis, the two Presbyterian Synods of Texas which governed Austin College & Trinity began to meet in 1941. Their proposed solution was a cost-saving merger of the two schools. While representatives of Trinity were enthusiastic about a merger, the idea created a huge amount of controversy and debate at AC. At the end of the year, the joint committee of the two Synods agreed to meet in order to move forward and make it official. They chose a date:

Immigration from Europe fueled America’s westward expansion, and Protestant denominations moved swiftly behind in order to win over new converts. The speed of the Presbyterian church, however, was more anemic than its Methodist, Lutheran, and Baptist cousins. Reaching the masses meant tent revivals and little concern about credentials, and the Presbyterian church was just too traditionalist, hierarchical, and devoted to the education and status of church elders (Presbyterian means “elder”) to keep up.

In the 19th century, a frustrated and more zealous group of Presbyterians broke with the church to form a splinter denomination, the “Cumberland” Presbyterians. The divisions between the Traditionalists and the Cumberlands were so strong that the latter felt the need to establish a Cumberland institution of higher education to combat the traditionalist school of Austin College in Huntsville. In 1869, Trinity was born in Tehuacana TX, near present day Mexia.

By the turn of the century, the frontier was settled and passions had cooled considerably. Trinity moved to the more vibrant Waxahachie in 1902, and played its first baseball game in Sherman against AC in 1903. The first football game came the following year, in 1904. By 1941, the Presbyterian rivalry was well established.

Trinity traveled to Sherman in 1941 for the annual season-ending Thanksgiving clash against the Kangaroos on the gridiron. 1941 was the inaugural year of Sherman Bearkat stadium, and AC came away with a 20-13 win against the Tigers. A photo of the game shows the Sherman Municipal building in the background, which still stands.

The November 28, 1941 edition of the Corpus Christi Caller-Times reported the game on page six, and mentioned that the contest might be the last meeting between the schools due to a potential merger. Page one was reserved for other news. The empire of Japan was moving into Thailand, and diplomatic efforts between Tokyo and Washington were breaking down.

The growing city of San Antonio had neither a public university nor a private protestant college within its limits, and was eager to facilitate a merged AC/Trinity college in the Alamo City. Trinity was deadset on moving to San Antonio, ideally as part of one merged institution but alternatively via simple relocation if necessary.

Austin College was not so sure. Rationalism dictated that a merged Presbyterian school in a growing urban area was wise, and the idea found support among some. But because AC was already nearing 100 years old and had already called Sherman home for nearly 7 decades, many were unwilling to move for emotional reasons. Some on the Board of Trustees were willing to consider a merger, “but only if it resulted in Trinity being absorbed into the older and stronger Austin College, not vice versa.”

A large contingent of AC alumni also expressed reluctance, and well-known professor George Landolt made his opposition known by noting his unwillingness to toss “all it [AC] has striven for in the past 92 years.” According to historian Donald Everett, those who resisted the merger “evidently had no alternative suggestions for relief of Austin College’s financial difficulties, rather they seemed to depend upon God to work out the practical side of their institution’s salvation.”

In spite of the heated debate, a preliminary vote was taken in the fall of 1941 by the two Synods. The merger was approved. A joint committee agreed to meet in San Antonio on Friday, December 9, 1941 to sign the merger in ink and to officially designate San Antonio as the site of the new Presbyterian school. It was all over but the shouting.

2,400 Americans perished on Wednesday, December 7, 1941 after the Empire of Japan’s attack at Pearl Harbor. Nearly half of the 2,400 died when the USS Arizona exploded and sank within minutes. 78 Texans gave up their lives that day; all 78 were aboard the USS Arizona. The global conflict which had begun in the previous decade was now truly global.

For AC, the war changed everything. The December 9th meeting went ahead as planned, but the views of Austin College representatives had transformed overnight. There was concern that “war would negate the possibility of meeting financial requirements of the merger.” The supporters of an Austin College in Sherman, who had seemed to depend emotionally upon a higher power for some sort of salvation, believed that deliverance had arrived. The merger was shelved.

Trinity nevertheless accepted an offer from San Antonio for relocation. After a final commencement in 1942, the entire campus was loaded onto 30 railroad cars and shipped from Waxahachie to Bexar County. The school has since called San Antonio home for 75 years. Back in Sherman, the war did begin to assist AC’s financial health by way of a new relationship with nearby Perrin Air Force base.

The move to San Antonio ended a remarkable era of rivalry during the first half of the twentieth century, when the schools were separated by only 90 miles. That move, plus the 360 miles separating the schools and a reluctance to compete in the similar conferences, put the rivalry on the back burner for much of the second half of the century. In fact, your humble author was not even aware of the significance of the Trinity rivalry during his Sherman days in the early 1990s.

But history reveals. From AC’s first win over Trinity in 1908 (another tale for another day) until the near merger in 1941, the Roos & the Tigers meet 33 times on the football field. The series record? 14-14-5. AC travels to San Antonio this Saturday to face Trinity in SAA Conference action. I plan to be there with my daughter. Hope to see you there.

Like AC-Trinity, the UT-A&M clash on Thanksgiving day is no more. Some of us hope it returns one day. One of the many reasons for the decline of the rivalry is the aftermath of the 1999 bonfire tragedy, and the University of Texas’s amazingly positive reaction to it. The UT student body poured out sympathy, the student body president praised A&M as a “family” in a way UT was not, and the Longhorn band’s performance of Amazing Grace & Taps at Kyle Field moved Aggies to tears.

The Roos & the Tigers are rivals. But it feels a lot like a sibling rivalry. At the end of the day, both institutions are Texan, both are Presbyterian-affiliated, both want the other D3 school to have its well-deserved place in the Texas sun. And if it were not for some decision made in Tokyo long ago, we might all be fellow alumni. If tragedy were to ever hit Trinity, you can bet that the Roos would honor the Tigers much like the Horns did in Aggieland back in 1999.

Still, it would be nice to see a win and hear the boys sing on the field. 😉 Go Roos! Beat Trinity. 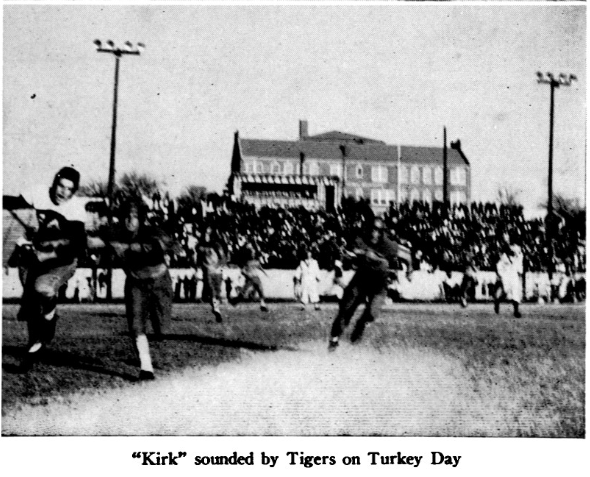 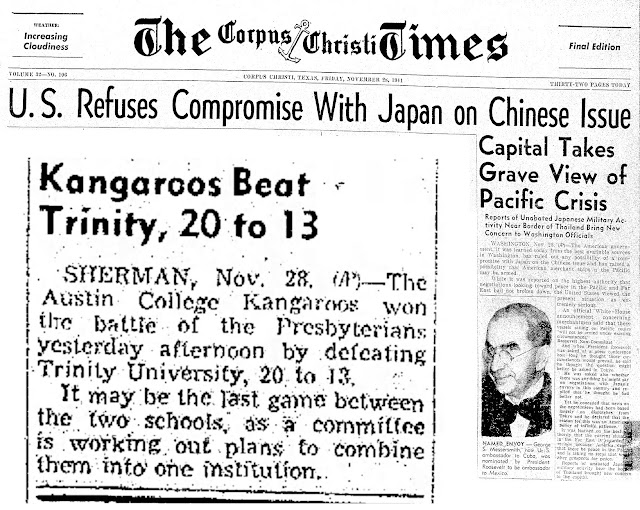 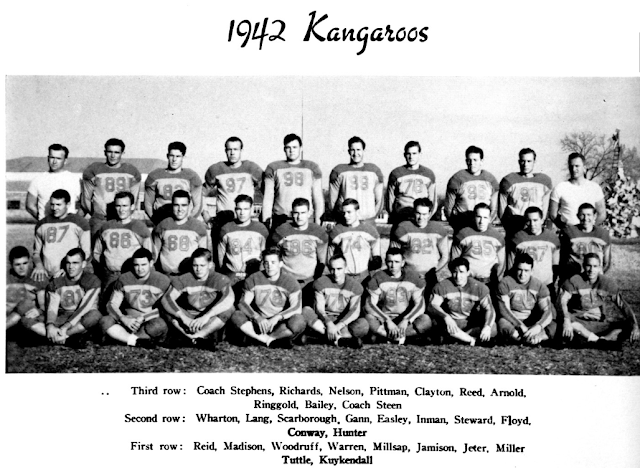 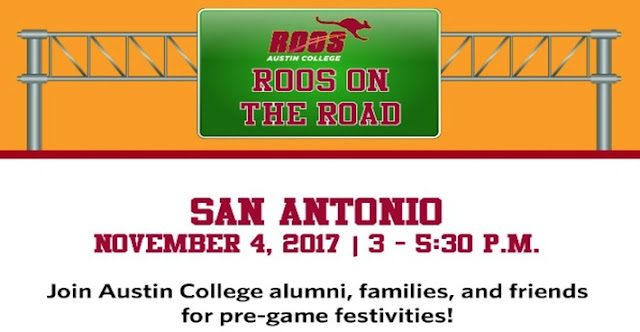