Part 1 & Part 2 PDF files.  Adobe Acrobat recommended.  Download may be required for best viewing, as images may not be sized correctly when embedded.  Click the download buttons above found on the embed containers.

Read the comments of those impacted by the 1981 season, and provide your own story.

For our friends in Minnesota whom I’ve invited to contribute, a tribute to the 1981 NAIA Champion Concordia Cobbers.

Gene Branum indicated to Marc Parrish that highlights of the Championship game appeared on ESPN (then 2 years old). Marc contacted his high school friend and ESPN fantasy sports analyst Matthew Berry to track the footage down. Unfortunately, Matthew was unable to locate. He also indicated that the ESPN archives from 1981 are incomplete.

Clayton Oliphint indicated to Marc Parrish that Dale Hansen of Channel 4 (KDFW) ran highlights of the championship game throughout the following week. Dale Hansen is now with Channel 8 (WFAA). Marc dropped by the Dallas studios of KDFW on his way to a Roo football game in October 2016, and recruited the assistance of Jay Soules & Victor Nguyen at KDFW in an attempt to locate. Unfortunately, Jay reported back the following:

“Marc: I searched our available news library (dates back to 1978 on videotape) and we do not have any footage of the game. Unfortunately our sports library prior to fall 1988 no longer exists due to water damage.”

Marc Parrish contacted KDFW (Fox-DFW), WFAA (ABC-DFW), KXAS (NBC-DFW), KTVT (CBS-DFW), Fox Sports SW, and ESPN by email about the 35th anniversary. Background information was provided, as well as video footage of Austin College, the championship game, and the “kick”. As of December 12, 2016, no responses have yet been received. 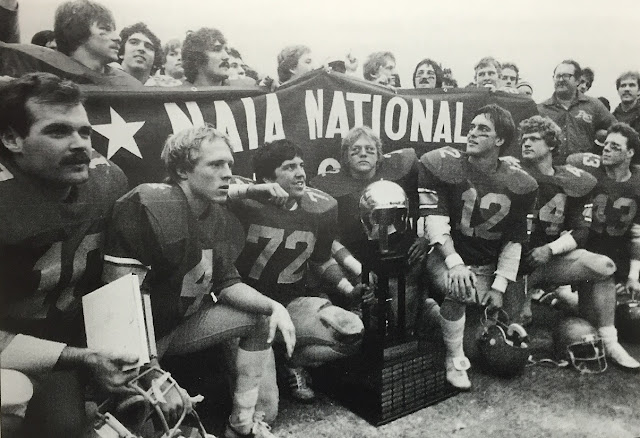 On this day 35 years ago, a small college in North Texas won a national championship in football.

It all seemed unlikely.  Academically oriented non-scholarship schools with small enrollments don’t win national titles in football.  And yet, against all odds, Austin College did exactly that on December 12, 1981 by winning the NAIA Division II national championship.

OK, technically a co-championship.  After dominating conference, earning a playoff bid, and advancing to the title game, our beloved Kangaroos tied the Concordia Cobbers (Morehead, MN) 24-24.  Both schools share the championship honors that year.

While the 1981 title game was the first trip to the finals for Austin College, Concordia had been there before.  The seniors on the 1981 Cobber team already had one NAIA D2 championship under their belt as freshmen, when the Cobbers downed Findlay College 7-0 in Ohio in the final game.  Even more remarkably, 1981 was not even the first Cobber co-championship.  Concordia rallied to a 7-7 tie in 1964 against Sam Houston State to earn its first title.

In 1981, there would be yet another rally for a tie.  The Roos found themselves down 10 late in the 4th quarter.  A TD cut the deficit to 3.  The defense held.  And one final Roo drive began to determine a winner.  That drive methodically made its way into Cobber territory.

With 78 seconds left, the Roos faced a 4th-and-11 at the Concordia 40.  Coach Larry Kramer considered going for it.  His kicker, however, begged for a chance to be sent in to tie the game with a field goal.  From 57 yards.

Gene Branum had kicked an NAIA playoff record 53-yard field goal in the quarterfinals against Panhandle State.  And now, with everything hanging in the balance, Kramer relented and sent Branum in to do the near impossible.  “Just like practice, Gene”, said holder Jim Vice.

The snap was solid and the hold was true.  The kick sailed south through the cold Sherman air for an eternity, dropping slowly towards the back of the end zone.  None of the thousands in attendance at Louis Calder stadium uttered a word.

The ball smacked the cross bar and bounced through.  Of course it did.

The game was effectively over.  After a few desperation plays, Concordia intentionally let the clock run out to avoid any disaster deep in its territory.  Austin College had just become the 10th college in the state of Texas to win a national championship in football.  And with the possible exception of the 2006 Rose Bowl, none of the other Texas schools could claim a championship won so dramatically.

When your humble author arrived on campus in the fall of 1988, the mythology surrounding the 1981 team and “the kick” was already very strong.  Ask AC alumni today and they’ll tell you all about the kick.  It was 143 yards long.  The kicker was the great grandson of Paul Bunyan himself.  And the ball hung on the cross bar for a full minute before the ghost of Pete Cawthon blew it over.

That mythology was aided in part by the success of my team, the 1988 Roos.  The 1988 AC team was arguably the second best squad of the Kramer-Tjeerdsma era, and hopes were high that this group might just replicate the success of their 1981 counterparts.  They certainly gave it a shot.  The 1988 squad won conference and advanced to the playoffs, but fell to eventual champion Westminster on a bitterly cold day in Pennsylvania.

It’s really, really hard to beat an NAIA power like Westminster on a frigid Pennsylvania field.  But not impossible.  Just ask the 1981 Concordia Cobbers, who upset the Titans on the road in the 1981 semifinals to earn a trip to Sherman.  In fact, without that Cobber upset, the 1981 Roo season might have ended on the exact same Titan field as the 1988 Roo season.

I’ve always compared the 1981 national championship game to one played 13 years earlier in Cambridge, MA.  In 1968, a dominant Yale team traveled to Harvard in what would turn out to be one of the most famous matchups in the history of the rivalry.  Yale held a 29-13 lead with under a minute to play.  Yet miraculously, Harvard scored a TD and 2-point conversion, recovered an onside kick, scored a second TD, and on the final play of the game converted a second 2 point conversion to tie Yale.

The famous headline of the Harvard Crimson the next day?  “Harvard beats Yale, 29-29”. 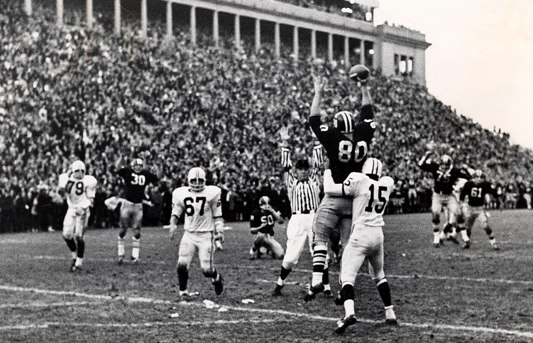 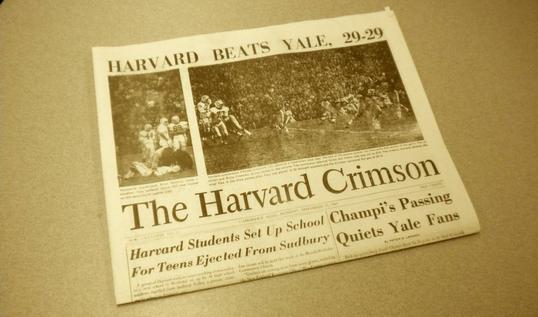 The video is a tribute to Austin College, the 1981 team, the championship, and the kick.  It was created for all Roos.  This entire post, the writing, and the reflections to come are a celebration of both teams.  Over the past few months I have spent time finding as many folks as I could who were on the field that day, in the hopes that they would be inspired to tell their story.

While I love to tell a good AC sports story, I could never do this one justice compared to those who were actually on the 1981 teams or those who were in the stands on that frigid December day.  If you were there, please tell your story in the comments below.   I can promise you that there will be many others besides myself who will be glued to your words.

One of the joys of sport are the “moments”.  After a lifetime of work and a season of preparation, outcomes come down to mere seconds.  The jump shot.  The at-bat.  The birdie putt.  The tiebreaker.  And of course the field goal.  These moments can at times break our hearts.  But they can also be sources of celebration and pride that last a lifetime.  The “kick” is one of those moments.

I love the success of the 1981 Roos.  I love the conference championship.  I love the playoff run.  And I love the national title.  But more than anything, I love the “kick”.  The kick is joy.  And it does not solely belong to the 1981 team.  The kick belongs to all Roos. 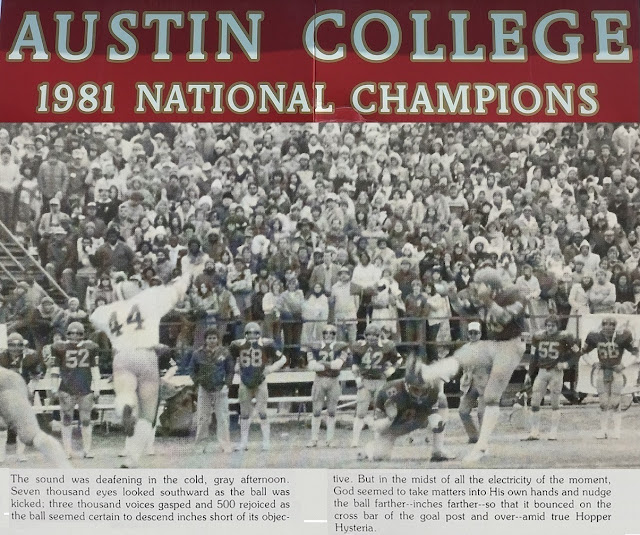 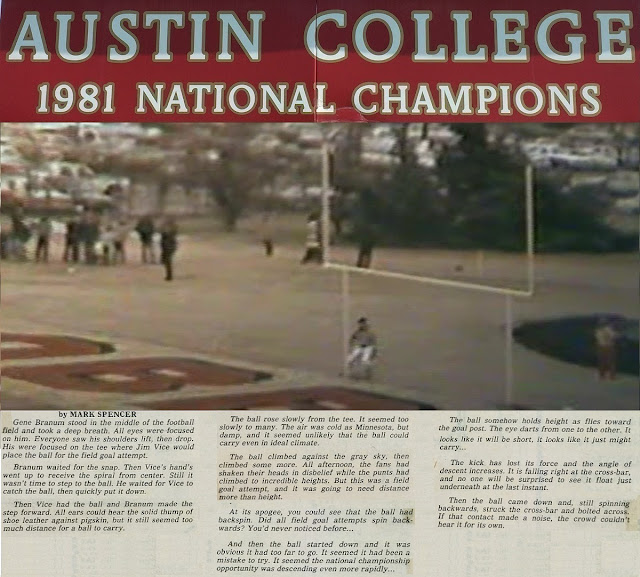 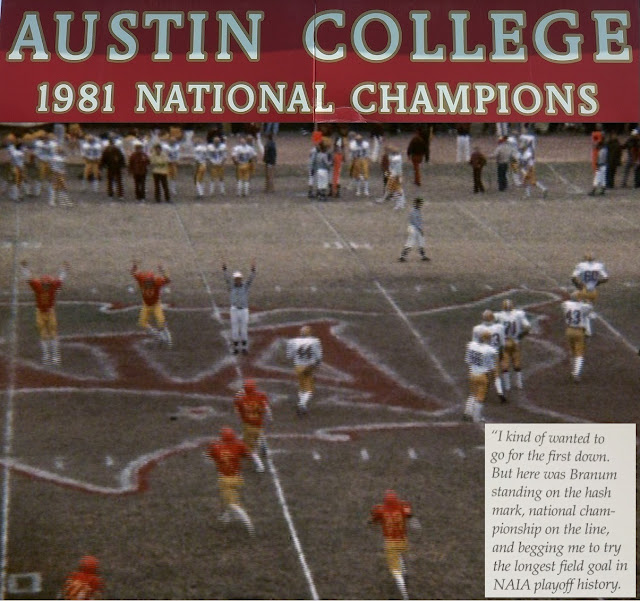