AC and an All-Texas Super Bowl

“An all-Texas Super Bowl? His will be done.” – Hank Hill

In Texas, football is king. Friday Night Lights talent at the high school level power teams across the nation. In any given year, you can expect to find multiple Texas universities in the top 25. And we take it for granted that the Dallas Cowboys should bring home the Vince Lombardi trophy. But an All-Texas Super Bowl? That would be a sight to behold. It would be the equivalent of a Subway Series in New York (which has happened) or a UNC/Duke NCAA title game in basketball (which has not).

The possibility has not gotten much press in 2017, in part because of the NFC dominance of the Cowboys and the AFC South mediocrity of the Texans. But don’t look now. The Texans are division champs and have a playoff win under their belt. Both teams are in the playoffs together for the first time in nearly a quarter century. And fittingly, the Super Bowl will take place in Houston, Texas this year.

I know what you are thinking. A professional football title game in Texas featuring two teams from Texas. Wouldn’t that be a first? I got news for you. It would not be a first. It has happened before.

And Austin College is involved.

The last time Dallas & Houston were in the playoffs together was in the early 90s. In 1991, both teams advanced to the divisional round but were just a bit too young. 1992 was supposed to be the year. But the Bills wrecked the party in the wildcard round with an historic comeback win in Buffalo. In 1993, the Cowboys were Super Bowl champions once again. But the Oilers fell in the divisional round to a down-but-not-out Joe Montana and the Kansas City Chiefs.

Still painful to watch.  The Bills come back and deny Texas a Cowboys-Oilers matchup.

The best opportunities actually came during the Cowboy-Oiler glory years of the late 70s.

Dallas was on its way back to the Super Bowl in 1978, and Houston almost joined them. But Pittsburgh shut down the Oilers in the AFC championship. Both teams fell in the 1979 playoffs to Super Bowl participants. Dallas lost to Vince Ferragamo and the Rams in the divisional round. The call of a game tying Mike Renfro TD catch late in the third quarter against Pittsburgh was botched, and the Oilers never recovered in the AFC championship game rematch against Pittsburgh.

Renfro’s TD is denied and Houston loses in the AFC championship game for a second straight year.

Houston traded for Ken Stabler in 1980 as a final piece of the puzzle. But even this 1968 Cotton Bowl buddy of 1981 AC Roo Russ Roden couldn’t get the Oilers past the Wildcard round. Dallas fell in the NFC championship game anyway. 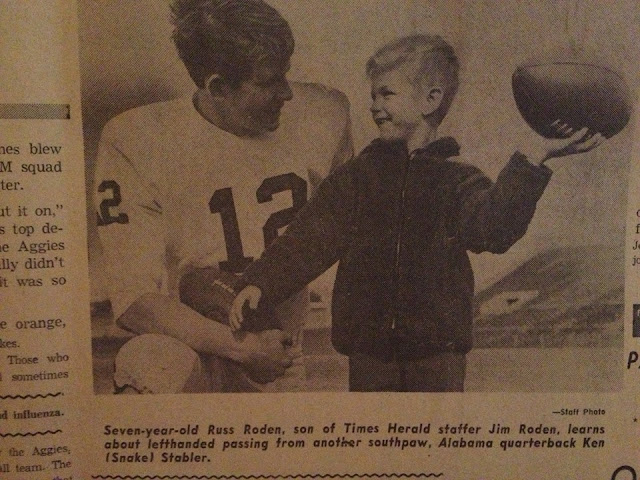 Even one of the most famous games in Cowboy football history is involved.

The Oilers and Cowboys advanced to their respective league title games in 1967, where both came up short. Dallas did so in dramatic fashion, losing to Green Bay in the Ice Bowl. With wind chills around -36F, Bart Starr’s QB sneak with seconds remaining sent the Cowboys back home. Vince Lombardi and his crew would move on to Super Bowl II, where they defeated the Kansas City Chiefs. The Cowboys and Packers face off tomorrow, nearly 50 years after their famous frigid meeting. Go Cowboys! #FinishTheFight.

Lombardi was nothing more than an assistant coach at Army when Odessa native Gene Babb arrived in Sherman in 1953. First year Coach Joe Spencer began to play him almost immediately, to great effect. The Sherman Democrat would write frequently about Babb’s “bull-like running” for the Roos over the next 4 years. Babb led the Roos to 3 winning seasons in independent, non-conference play, the highlight of which was an upset of East Texas State……AC’s first victory over the school since the days of Pete Cawthon. The professional scouts began to show up in Sherman. The Eagles were interested, as were the Lions. But the 49ers drafted Babb first in 1957. According to Babb, “I sat there in the corner of Hughey Gym and signed a contract for $6,000 for my first season……..all the money in the world.” 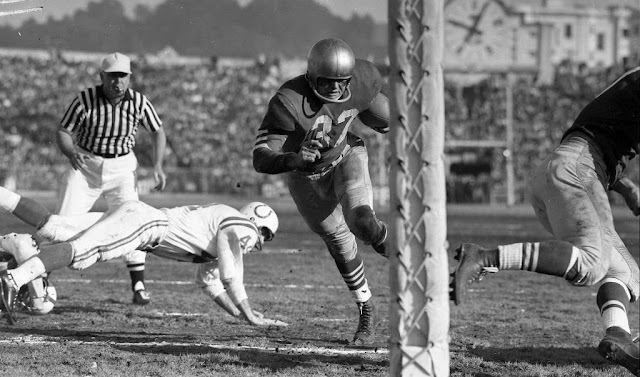 Roo Gene Babb scores a TD for the 49ers against the Baltimore Colts on December 8, 1957 in San Francisco.   One year later the Colts would win the NFL championship in “The Greatest Game Ever Played”.

Y.A. Tittle and Gene Babb lead San Francisco to a 35-31 victory over Bobby Layne and the Detroit Lions in 1957.

Babb played in the NFL for 7 seasons and 3 teams. The 49ers used him as a running back, as did his second team……….a new 1960 expansion squad in Dallas coached by a young Tom Landry. But Houston needed a linebacker in 1962, and converted Babb to the defensive side after acquiring. One Oilers assistant coach probably had some influence in the decision to acquire Babb; Joe Spencer had moved on from AC and was in charge of Houston’s offensive line in 1962.

The George Blanda-led Oilers were two time defending AFL champions in 1962, and with Babb backing the defensive line advanced all the way to the AFL title game for a third year in a row. Waiting for them in the championship game? The Dallas Texans. 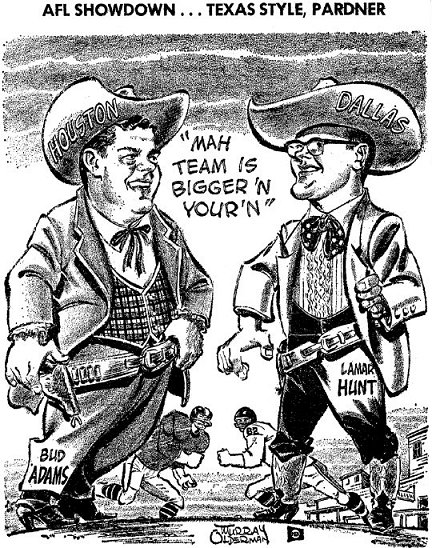 Hank Stram’s squad had a hall of fame quarterback in Len Dawson, and were looking to dethrone the defending champs. Just as in 2017, the title game took place in Houston……..at UH’s Jeppensen Stadium (since rebuilt as TDECU Stadium). It was a professional football championship game in Texas between two Texas teams. Curt Gowdy called the game, and Jack Buck was on the sidelines. Among their topics of discussion was recently approved financing by the city of Houston for some new “domed” stadium.

The Texans started strong, and held a 17-0 lead at the half. But Babb and the Oilers defense shut down Dawson in the second half, and Houston tied the score late at 17-17. Just like the famous 1958 NFL championship game, this contest would be decided in overtime. But unlike 1958, the 1962 AFL title game would need two extra periods.

From the 4th quarter into the 6th, Babb and the Oilers would continue to bend but not break. But eventually the Texan attack became too much. A long Dallas drive led to a championship clinching field goal. Stram and Dallas celebrated. Babb and Houston left the field in disappointment. Texas was the center of the football universe. See Gene Babb highlights from the 1962 title game in the video found in the comments below.

Change has been a constant since that 1962 game. The Dallas Texans left for Kansas City. The AFL and NFL merged. The Oilers departed for Tennessee. And the Houston Texans arrived in their absence. A Dallas or Houston team has been in the playoffs for 39 of 51 years since the inception of the Super Bowl, and both teams have been in the playoffs for 9 years. And yet, since 1962, an All-Texas title game has remained elusive.

We know the odds. Even with home field advantage, the Cowboys have much work to do. And their path is easier than Houston’s. The Texans route back home to Houston will require tremendous upsets in Foxboro & Pittsburgh or Kansas City.

But as of the time of this writing, Hank Hill’s fondest wish still exists. If an Austin College Kangaroo can live the dream of signing with the NFL in Hughey Gymnasium, then surely we can at some point experience the dream of an All-Texas Super Bowl. Ideally in Texas in the year 2017. But if not, at some future date in our lifetimes. His will be done.