You may have heard of “Red” Cashion. He a legendary former referee in the NFL. Now retired, Cashion was well known for his enthusiastic call of “First Dooowwwnnn!” at the end of a penalty. That call also makes an appearance in the title of his autobiography, “First Dooowwwnnn!.......and Life to Go!”

Cashion is a Brazos Valley legend who resides in College Station today. The Bryan/College Station Eagle reported just this summer that new Aggie head coach Jimbo Fisher visited with Cashion after August practices. Cashion was born on the A&M campus in 1931, before the College Station of former mayor Nancy F Berry officially existed. He quarterbacked A&M Consolidated High School to three straight winning season and two playoff appearances in the late 1940s, before enrolling at Texas A&M. As a college student in Aggieland, his interest turned to officiating.

I’ve known about Cashion my entire life, and even met him once a long time ago in College Station. But the memory that remains is watching football as a kid with my family in our College Station home, and hearing Paul & Linda Parrish mention that Cashion was from College Station. At that time in the early 1980s, there weren’t many local kids playing in the NFL. So the fact that a local guy was officiating seemed to be a big deal.

Cashion’s career started small. As a student at A&M, he began officiating local high school games. That effort eventually led to small colleges and the Southwest Conference. Cashion finally got his big break in 1972, when the NFL requested his services. He retired 25 years later, having refereed two Super Bowls. Cashion was inducted into the Texas Sports Hall of Fame in 1999.

The Chicago Bears were facing the New England Patriots in the Super Bowl in 1986, and Cashion was picked as head referee. At the start of the game, he mistakenly ran to the wrong side of the field. Instead of positioning himself on the receiving (Chicago) end, he had made his way to the kicking (New England) side. Upon realizing his mistake, Cashion jogged over to New England kicker Tony Franklin.

“Hey Tony, I just ran to the wrong side of the field. Whoops. Let’s chat for a while so it looks like I did it on purpose.”

Like Cashion, Tony Franklin was an Aggie. In the 1970s, Franklin booted field goals of 64 and 65 yards at Kyle Field against Baylor. Now, two Aggies were chatting and delaying the start of the biggest sporting event in the country. What were they talking about? Aggie Football. Texas A&M had just recently stopped Bo Jackson and Auburn in the Cotton Bowl.

At this point, you are probably thinking. “Fine, Marc. This is great and all. But it’s Austin College Homecoming and the 100th anniversary of Armistice Day this weekend. What in the world does this have to do with AC and the war to end all wars?”

Here’s the deal. We may call him “Red,” but his real name is Mason Lee Cashion Jr.

“Red” developed a love of athletics from his father, Mason Lee (M. L.) Cashion Sr. The elder Cashion was hired by Texas A&M in 1927 as the Director of the Aggie YMCA. The position in 1927 was something similar to Athletics Director today, as the YMCA was the focal point before WW2 for all social and athletic activities on a college campus. From 1927 to 1952, Cashion Sr. was a fixture in the lives of all Aggies, athletes or otherwise. He presided over the rise of Texas A&M athletics as the Southwest Conference came into its own, and facilitated a campus transition to a wartime footing after Pearl Harbor. Cashion Sr. also played a significant role in Homer Norton’s 1939 football team. That 11-0 squad won the Sugar Bowl and earned Texas A&M a national championship. One of the members of the 1939 team was instrumental in assisting “Red” Cashion’s success as an official in the NFL.

Yes, Texas A&M was lucky to have acquired the services in 1927 of M.L. Cashion Sr. The Aggies had lured him away. From Austin College.

M.L. Cashion Sr. was the Director of the Austin College YMCA from 1912 to 1927. Just like his tenure at Texas A&M, Cashion’s role in Sherman was similar to the Austin College Athletics Director position today. His office was in the old AC YMCA building, which was demolished long ago to make way for Dean Hall.

Luckett Field was the home of Austin College athletics for nearly a quarter century after 1900. The field was located north of campus, near the corner of Luckett and Lewis. Its distance from campus and the need for more modern facilities, however, were evident in the early 1920s. More importantly, Austin College athletics was enjoying a “glory years” period that decade, and a closer, more modern athletic field was desired. That field was born in 1923; the student body voted overwhelmingly to name it “Cashion Field.”

The field ran west to east, covering what is now the north end zone of Calder Stadium & Hughey Gym. Have you visited the new, red kangaroo at the front of Hughey? That Kangaroo sits on the old Cashion Field. It was ready for the first home game of the 1923 season; its official dedication came later that season, during halftime of the Tulsa game. AC beat Tulsa 17-7, and won the 1923 TIAA conference championship.

Austin College enjoyed one of its finest seasons ever in 1924, defeating the SWC champion Baylor Bears, the third place Rice Owls, and coming within a hair of knocking off the second place SMU Mustangs. At the end of the season, Coach Pete Cawthon understandably declared the Kangaroos the “unofficial champions of the Southwest Conference.” That year also included a novel, late season matchup between TIAA powers Austin College and Howard Payne. At the insistence of M.L. Cashion Sr., that game was played on a Tuesday. Tuesday, November 11, 1924. The sixth anniversary of Armistice Day.

Because of the uncommon weekday for play, few other sporting events were occurring in the state of Texas. Cashion Sr. hit the papers, encouraging AC alumni and Texans from around the state to travel to Cashion Field in Sherman to watch the game and honor those who had served in the Great War.

“Wanted: 5,000 grid fans to attend Austin College-Howard Payne football game here Armistice Day. This is the call being sent out over all North Texas by M.L. Cashion, athletic director of Austin College, in an effort to draw one of the largest crowds that ever attended a football game in Sherman to the gridiron classic here on November 11.”

“The game on Armistice Day will be the premier football classic of North Texas, since no other large games will be played in this section of the State on that date. It will afford grid enthusiasts an opportunity of witnessing a battle between the two leading teams in the TIAA Conference.”

And what a game it was. 3,500 fans packed Cashion Field to watch an inspired Howard Payne team do in the first half what Baylor, Rice, and SMU and failed to do: score points.

“For three periods the visitors from Brownwood outplayed the Kangaroos. In the final 15 minutes, the Austin College team came back driving, hammering, boring and passing. They scored 10 points and were on the verge of a scoring a touchdown which would have won the game. When the pistol barked to snap the tension, Austin College had the ball on the Howard Payne four-yard line and was hammering forward.”

“The crimson Kangaroos of Austin College, kingpins of the TIAA for two seasons, conquerors of Baylor and Rice this year, are in temporary eclipse and the gold and black of the flashing, smashing Howard Payne Yellow Jackets is in the ascendency.”

Howard Payne would capture the 1924 TIAA championship from the “unofficial SWC champions” in Sherman.

During his tenure as YMCA director at AC, Cashion Sr. coached AC baseball. His 1917 squad, led by star pitcher Homer Rainey, traveled to Texas A&M. Pitching at Kyle Field, Rainey and the Roos dropped a decision to the Aggies. Many of those participating in and watching the game would soon be trading their baseball outfits for the uniforms of US soldiers. Cashion Sr. was one.

M.L. Cashion Sr. enlisted with the armed services in 1917, and served in France for the duration of the war. He was stationed near Dijon, France during the fall of 1918. Not far away, Aggie J.V. “Pinky” Wilson was using his limited free time to pen the “Aggie War Hymn.” On November 11, 1918, Cashion’s outfit was drilling just outside of Dijon when they heard a commotion. The news spread through the camp like a wildfire. Armistice Day. Remembrance Day. The worst conflict the world had ever known was over.

In the spring of 1941, the memories of World War 1 were fading as the concerns of a second global conflict were increasing. That April in College Station, M.L. Cashion Sr. was honored for 15 years of service to Aggieland. At Sbisa Hall, the Presidents of both Texas A&M and the University of Texas saluted the Aggie YMCA Head and Athletic Director. The Aggie President was Dr. T.O. Walton, a future grandfather-in-law of “Red” Cashion. The Longhorn President was Dr. Homer Rainey, Cashion Sr.’s AC hurler whom he had picked to pitch against the Aggies back in 1917. “Cash was the best fungo hitter in the world,” Dr. Rainey recounted.

12 Oaks stand between Dean and Baker Hall on the campus of Austin College. 55 Oaks surround the Simpson Drill Field on the campus of Texas A&M. The 12 Oaks at AC stand within sight of the location of Cashion Sr.’s now-demolished YMCA building at AC. The 55 Oaks at A&M stand within sight of Cashion Sr.’s still existing YMCA building at A&M. These Oaks represent the students lost during the Great War which ended 100 years ago his weekend.

But while lives were tragically lost during the Great War, many lived to return home to families and to reflect on the Armistice Day of November 11, 1918. That includes M.L Cashion Sr., an Austin College, Texas A&M, and state of Texas legend.

Saturday is football. The Aggies will host Mississippi at Kyle Field, the stadium where M.L. Cashion Sr. led the Roos against A&M in 1917 and supported the Aggies in their march to a 1939 national championship. The Roos will be celebrating Homecoming by hosting Rhodes College at Calder stadium, a part of which sits on the old Cashion field. Tailgating at the Larry Kramer Outback will be packed. 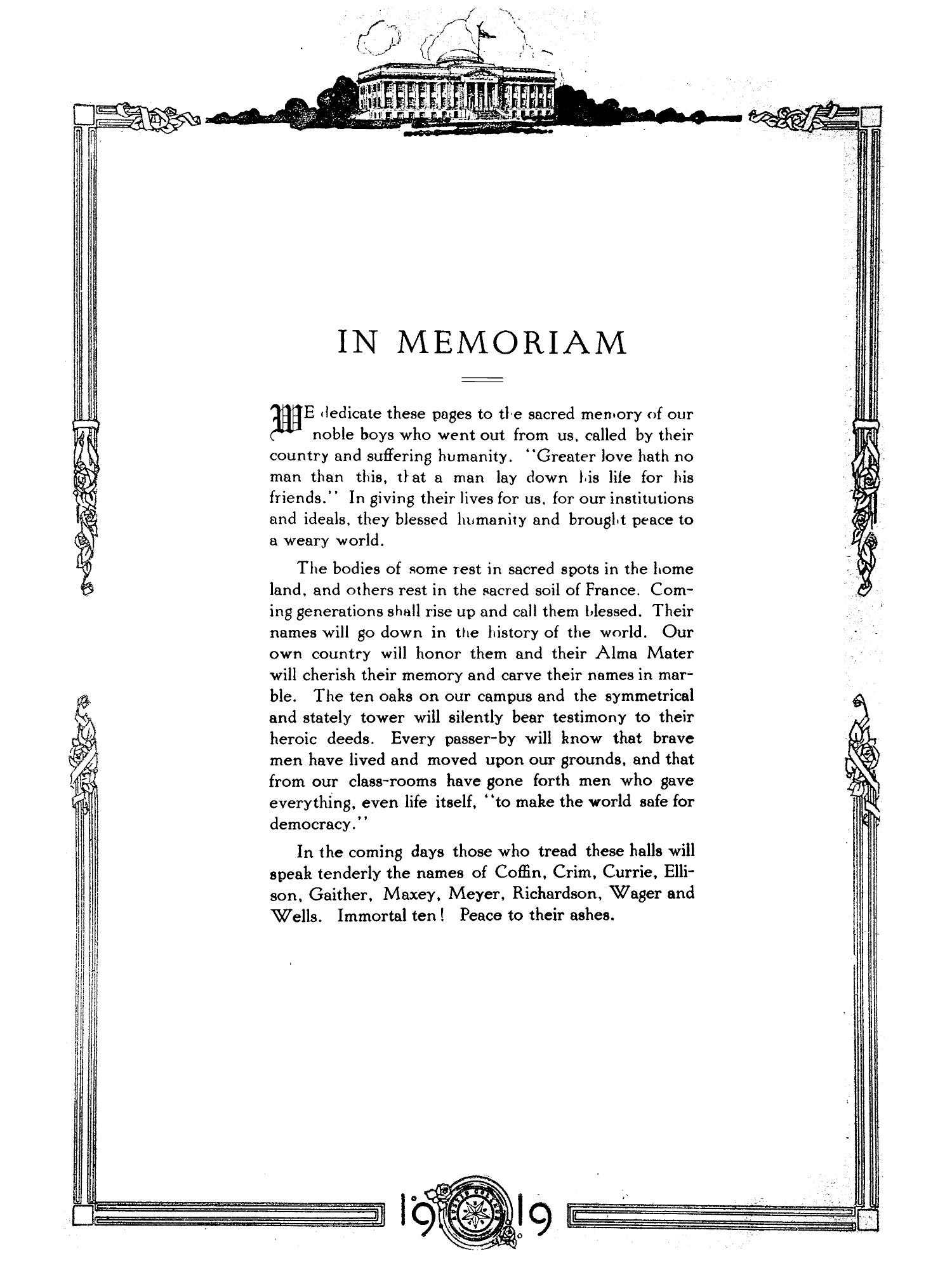 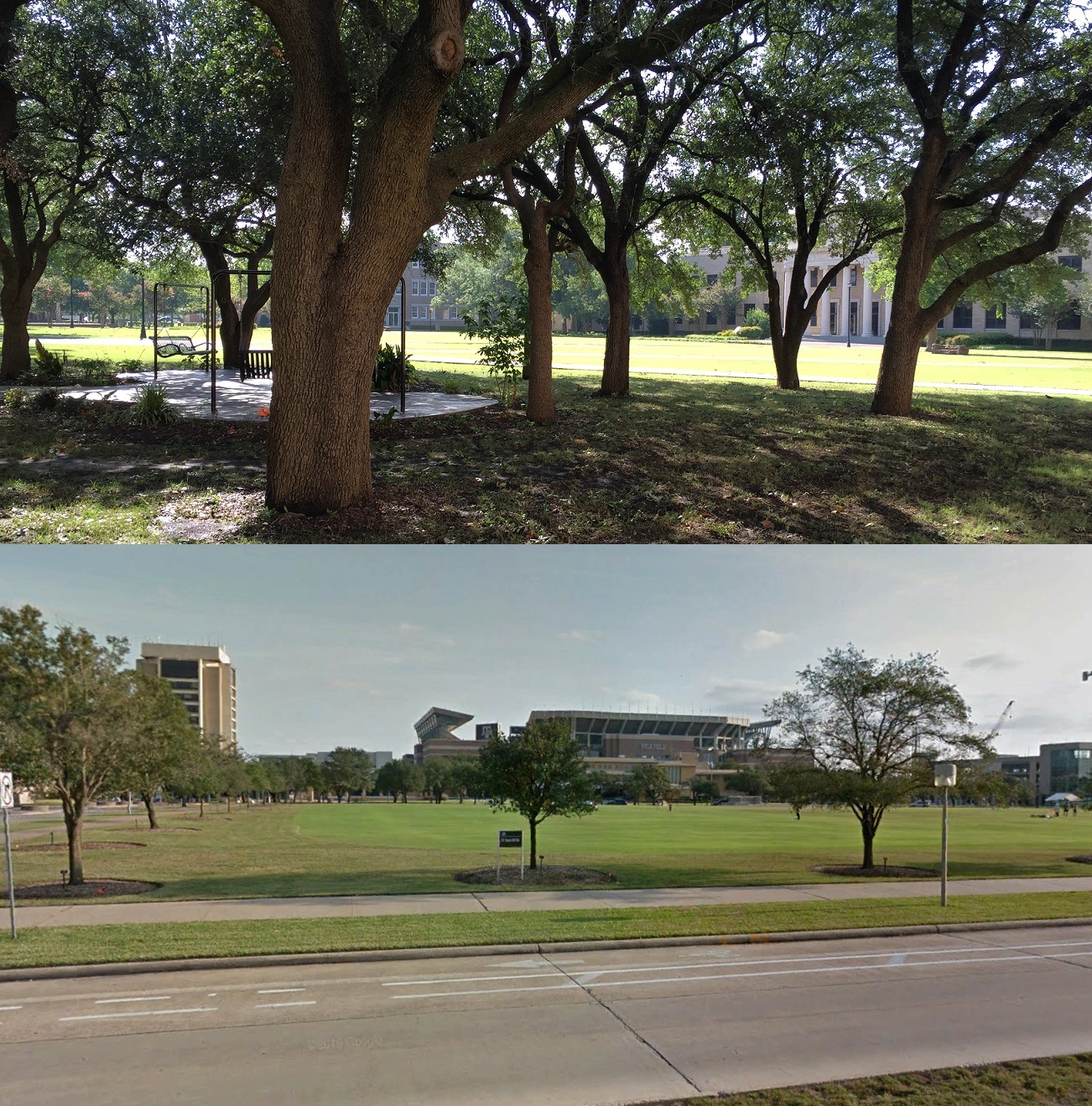 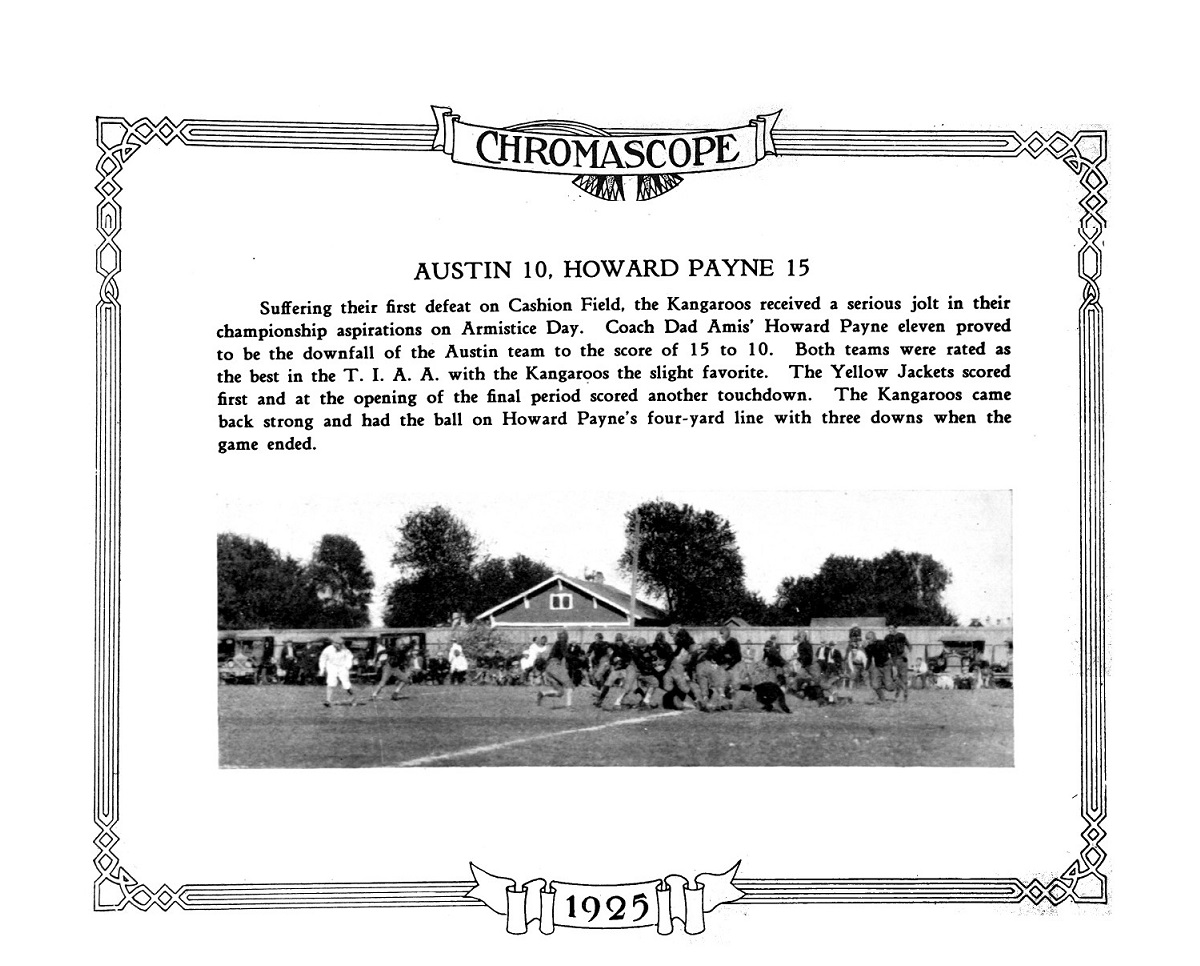 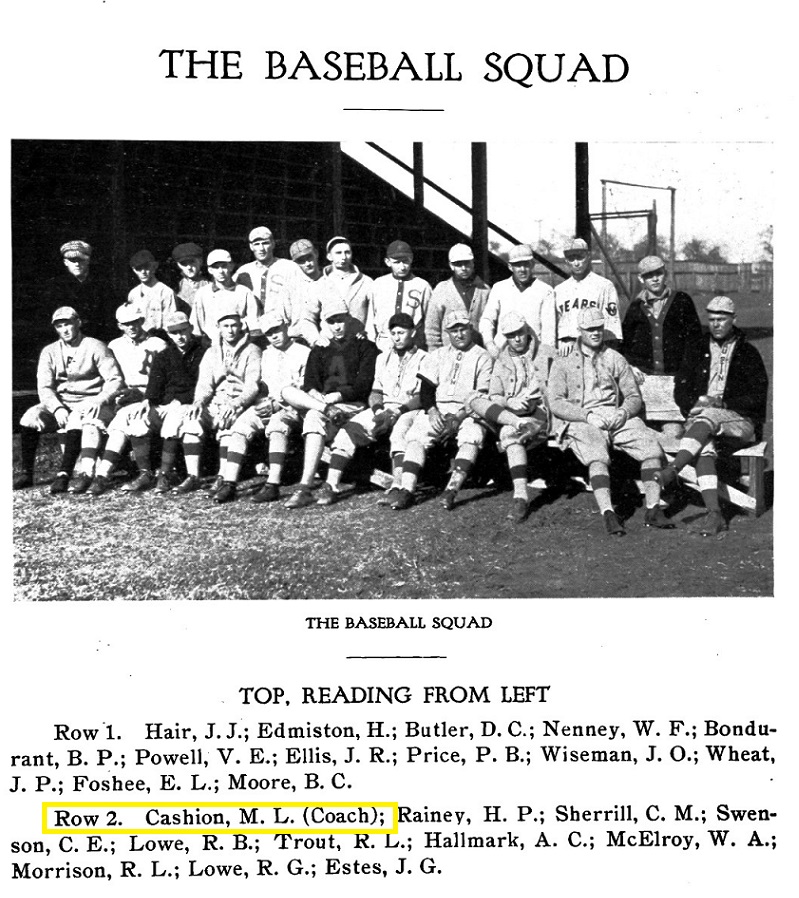 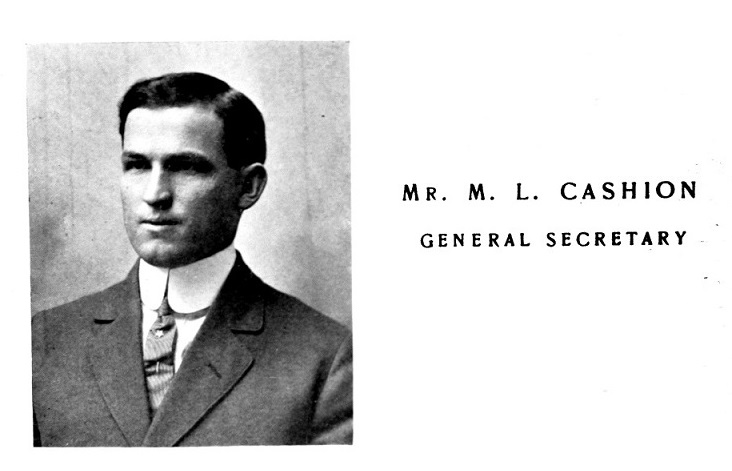 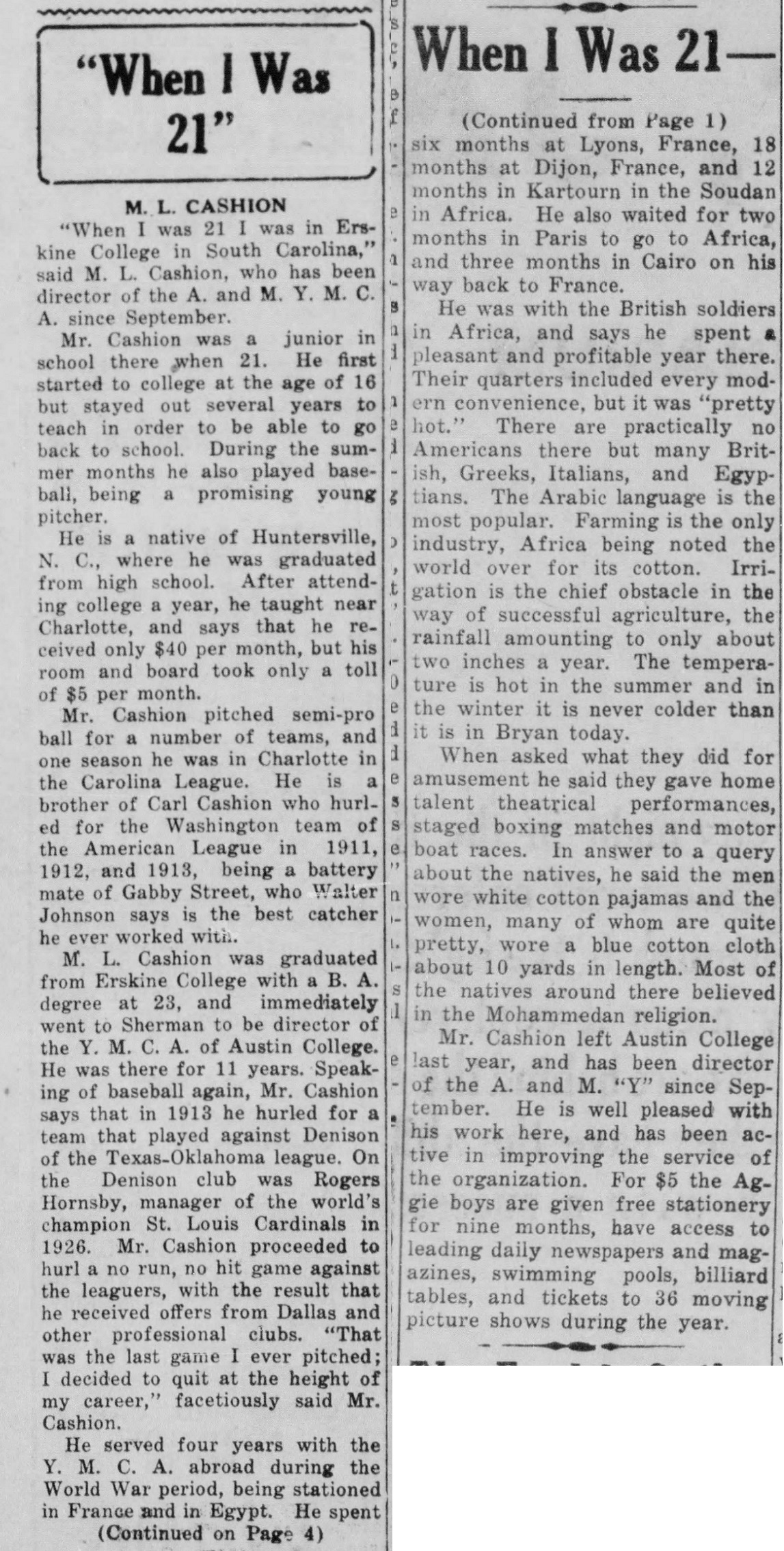 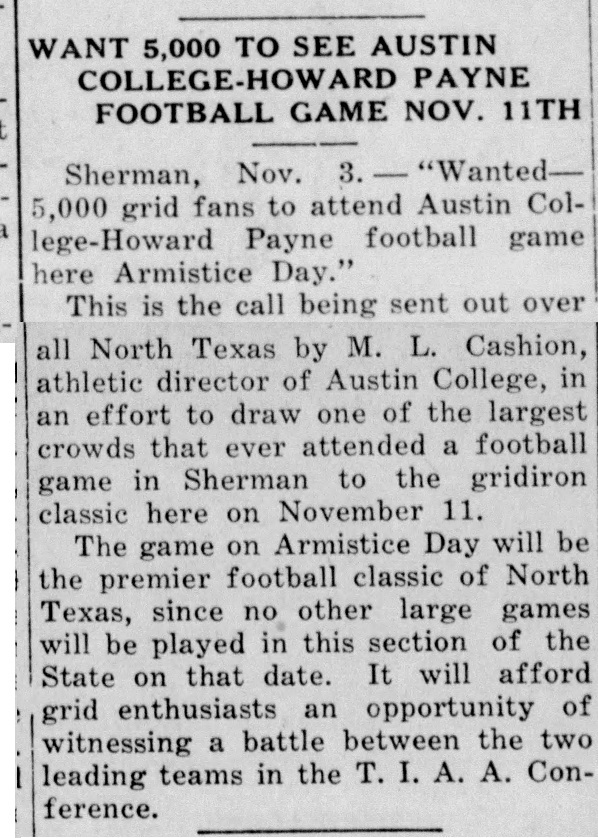 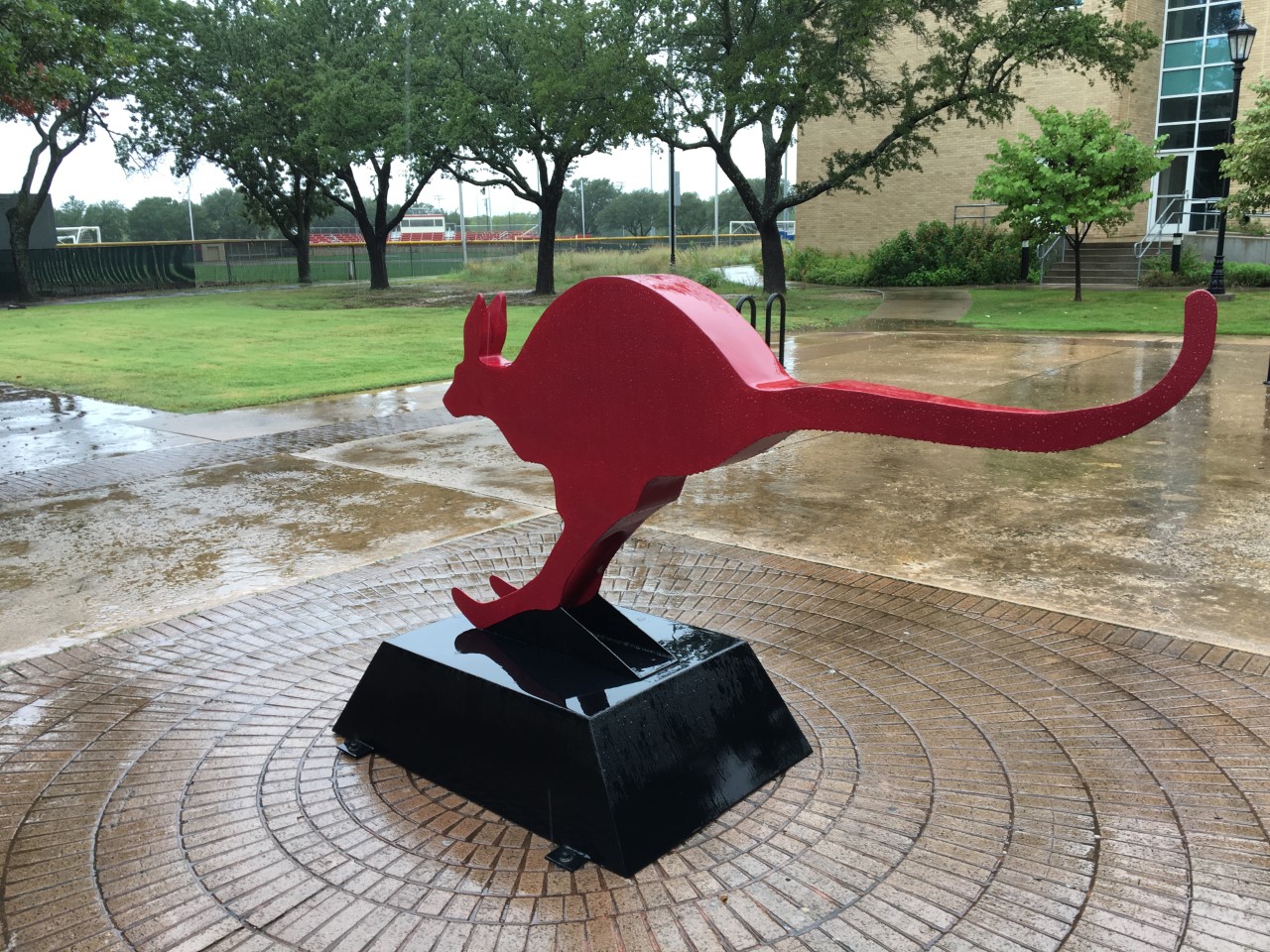