For tonight’s post, we are back to AC baseball.

In Texas, Longhorn baseball is royalty. 6 national championships, 35 CWS appearances, and 73 conference championships since 1911……….the last year the Horns fell to the Roos (see earlier post).

AC continued to face the Horns well into the 1920s, but the results were not quite as good. In 1919, our beloved Roos fell 12 to 3 to UT in Austin, and the April 19th Houston Post had a write up of the game.

The UT star of the win over AC was Bibb Falk, who had 3 hits on the day. Falk was also a pitching star for the 1919 Horns, who would end up Southwest Conference Champions that year.

In fact, Falk was so good that he attracted the interest of the Chicago White Sox. Falk signed with the Sox in October 1919, ironically the very month in which the “Black” Sox infamously threw the Series to the Reds. In the March 21, 1920 St. Louis Post-Dispatch, owner Kid Gleason was touting Falk as the next Ruth.

The Black Sox scandal would explode in September 1920, eventually leading to the suspension of eight players………including Shoeless Joe Jackson. Jackson’s replacement in left field? Bibb Falk.
Falk would have a long career in the majors, and then return to Austin to coach the Horns for nearly a quarter century. In 1975, UT’s new home Disch-Falk Field would be named after him and his 1919 coach at the time. In fact, Horns baseball has only had 4 coaches since 1911……Disch, Falk, Gustafson, & Garrido. 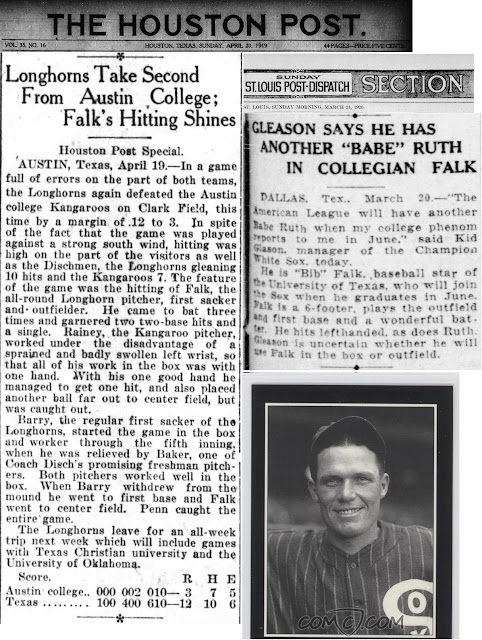 Bibb Falk replaced this guy one year after beating the Roos….