Now this is how you take a story full circle.

Our last tale involved the 1912 AC Roos crushing the Rice Owls 81-0, to date their worst defeat ever. While one sided, it is nowhere near the most lopsided victory in college football history.

That honor goes to John Heisman, he of the Heisman Trophy. His Georgia Tech squad would famously defeat Cumberland 222-0 in 1916, and would be awarded a national championship in 1917. Heisman’s playing and coaching career spanned 40 years, after which he would become a member of the downtown NY athletic club and the establishment of the trophy that bears his name.

After the 81-0 defeat by the Roos, the Rice Owls resumed a decade of disappointment. By 1924, the Owl faithful were determined to right the ship. What better way than to lure John Heisman to Houston to turn Rice into a winner?

In February 1924, Rice did just that, making national news in the process….especially on the East Coast where Heisman had enjoyed much of his success. See columns from the Galveston Daily News & Franklin (PA) News-Herald.

And boy did Heisman start off with a bang. In his first season, he engineered a 19-6 defeat in Houston over the Texas Longhorns. This win was only the second Rice victory over UT since the inception of the series.

The November 2, 1924 Houston Post has a recap, complete with photos. Rice was back baby! Ain’t no stoppin’ us now! Heisman as coach beating the Horns? Who is next on the schedule for the Owls? 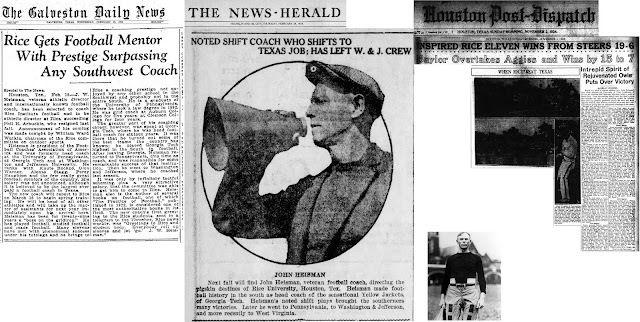 Up next for the Owls? The Austin College Kangaroos at home. The Houston Post that week had numerous articles on the game.

On November 4th, Coach Heisman was warning about a let up against the powerful Roos. “‘Eternal vigilance is the price of safety’ said Coach Heisman, who admits to having been caught napping a couple of times during the course of his long career…” AC was the owner of multiple T.I.A.A. championships in the early 20s (a second “glory years”), and had already defeated Baylor that year.

The November 7th Houston Post included a preview of the game, complete with analysis of AC and photos of the coaches & team. Also, a column about the efforts of the team, band, and fans to make the trip from Sherman to Houston.

And yup, in spite of Rice luring Heisman away from the East, Heisman turning the program around with a UT win, and Heisman warning of a failure to prepare, you guessed it……………AC 6, Rice 2.

The Houston Post recap of the game was full of commentary about how Austin College should be strongly considered for Southwest Conference membership. More on this topic later. 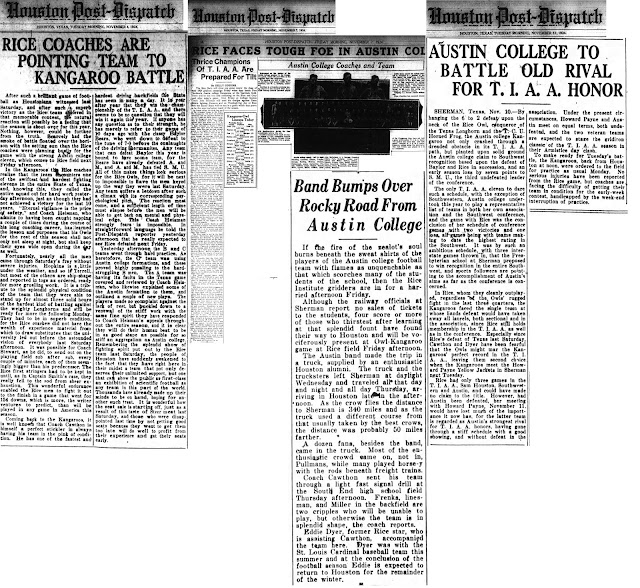