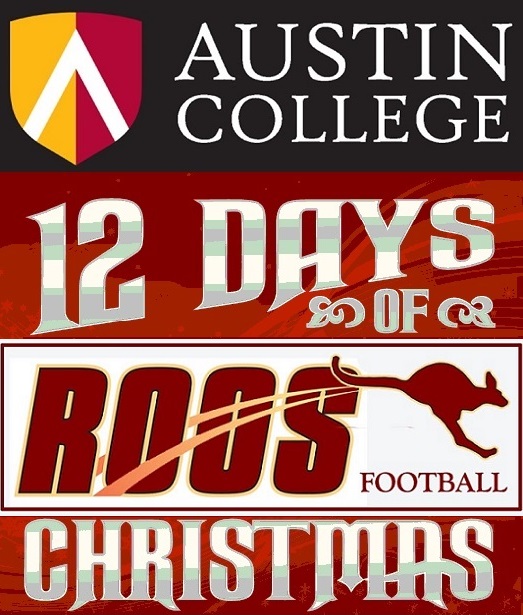 1988 was the Year of the Titan. The Westminster College (New Wilmington, PA) Titans went 14-0 and won the NAIA D2 national championship. To earn that title, Westminster had to get past the Kangaroos of Austin College in the playoffs. The game was played at Burry Stadium on the campus of Westminster.

The 1988 Kangaroos had won the TIAA Conference with a 9-1 record. They fell to the Titans at Westminster in the first round of the NAIA D2 playoffs on a bitterly cold and windy November Pennsylvania day. By December, it was a lot colder. Two playoff wins after the AC game, Westminster found itself in the title game against Wisconsin-La Crosse at Burry Stadium. The field was covered in snow, with more coming down.

After knotting up the score at 14-14, Westminster got the ball and began a late 4th quarter drive eerily similar to the 1981 Austin College drive that led to the famous field goal and co-championship. That Titan drive stalled at the 33-yard line with 13 seconds left. Facing a 4th-and-10, most assumed the Titans would try to secure a first down and then attempt a field goal to avoid a co-championship. Instead, according to Westminster running back Brad Tokar, the Titans rolled the dice and went for an “all-or-nothing” TD and an outright championship.

Dave Foley reeled in Joe Micchia’s bomb for the score with 7 seconds remaining, and was immediately mobbed by Westminster students standing along the sidelines. If you tell Westminster that the 1981 Austin College-Concordia game was the most dramatic title game in NAIA D2 history, you would probably get some disagreement.

The Titans season was documented in a video: “1988: The Year of the Titan”. I’ve shared that video today. Has it been nearly 30 years since you last saw the 1988 Kangaroo football team in action? Hold on to your hats. You’re about to briefly see them again.
I highly recommend watching the video from start to finish. But if you prefer just the highlights, here is some help:

The 1981 championship team sits alone among the greatest Kangaroo football teams in history. But the 1988 team should be placed somewhere right behind. How good were the 1988 Roos? The 1981 Roos scored 358 points over 13 games. The 1988 Roos scored 374 points over only 11. There are currently 6 members of the 1988 team in the AC Hall of Honor; 5 members made NAIA All-American. The 34.0 ppg average of the 1988 team is the second highest in Austin College history. I was fortunate enough to watch it all; this team was my welcome to Sherman.

The 1988 Roos played 11 games that year. We are going to go through each one over the 11-day period from December 1st to December 11th. Over the past 3 months, I’ve been accumulating newspaper clippings from the Dallas Morning News and other papers from around the state, and have been writing commentary for each gameday. I’ve also been friending members of the 1988 team on Facebook, so that they can all be included. The players, coaches, and fans must be a part of this effort. While I can do an adequate play-by-play, only those on the field can provide good color commentary.

How am I able to tell the story of the 1988 season? Well, I happened to watch 7 of these games in person. I listened to most of the other 4 on the radio. And my freshman C/I leader at AC in 1988 was a member of the team. Some fellow by the name of Otis Amy. I hear he could play.

So this post is a heads-up and a call for contributions. If you were a player, coach, or even just a fan like me, please share your stories over the first 12 days of December. Also, do you have photos? You are encouraged to image and share. And the holy grail. Video. Do you or does your family have home video from the 1988 season? I’ll be happy to assist with the digitizing, if you can locate and send to me.

Ahh yes, video. Three months ago, I began a journey for video of the 1988 season. I am here to report both bad and good news.

My understanding is that Coach Tjeerdsma and AC football began to record VHS tapes of season highlights starting in 1990. While much effort has been made by AC to digitize 8mm game film before 1990, the year 1988 was not recoverable due to degradation over time. All of those Otis Amy catches, as well as Jeff Cordell’s 100-yard interception return against Tarleton at home, may be lost.

I reached out to the athletics department at Tarleton. After all, the highlight of the 1988 season was the conference clinching win in Stephenville. The Tarleton staff was sympathetic, but informed me that many years of Tarleton game film, including 1988, had also been lost due to decay. Otis Amy’s record breaking NAIA catch in Stephenville may be gone forever.

But then I finally hit a bit of pay dirt.

Brad Tokar narrates the “Year of the Titan” video shared today. He’s the Westminster running back who rushed for 167 yards against the Kangaroos at Burry Field nearly 30 years ago. Today, he’s the Director of Admissions for Westminster College.

I contacted Brad and the Westminster athletic department, mentioned last year’s 1981 reunion, and told them of my plan to re-live the 1988 Roos season and by extension their incredible national championship run. Brad loved it, and put me in touch with a retired Westminster coach by the name of Scott Renninger. Renninger was on the sidelines that day against AC in 1988.

Coach Renninger called me up, and told me a story. Back in the early 1970s, he had flown down to Texas for a coaching job interview at Austin College. Bob Mason picked him up at DFW and took him to Sherman. While he did not win the AC job, he had fond memories of both the trip and his time with Coach Mason. He was also a fan of telling the story of 1988.

Renninger told me that he knew a VHS of 1988 Westminster game film highlights had been made. He was determined to find it and send. After a few weeks, he called me again. He had found the tape, and it included a full 5 minutes of AC-Westminster highlights. He has since mailed it to me, and it’s being digitized as we speak. It will be posted on December 11th, the day devoted to the AC-Westminster game. Yes, the highlights are from an opponent in a losing effort. I too would rather see highlights from one of the wins. However, if you still enjoyed seeing the 1 minute of 1988 AC football today, get ready for another 4 minutes next month.

Coach Renninger was at Westminster in 1981 as well. The Titans had a strong season that year, and advanced to the NAIA D2 semifinals. There, Renninger and Westminster met Dwight Hintermeister‘s Concordia Cobbers at Burry Stadium. The Cobbers edged the Titans 23-17 in yet another Westminster game highlighted by bad weather. Soon, the Cobbers were on the way to Sherman to take on Larry Kramer’s Kangaroos. Had Westminster found a way to win, the Titans might have chosen to play the title game in New Wilmington. The 1988 Kangaroo season ended at Burry Stadium, and the 1981 Kangaroo season almost did as well.

Otis is back home in East Texas, where he is a minister and principal at Carthage ISD. I’ve been exchanging emails with him, and have invited him to participate. I plan on reaching out to all 1988 Roos who have yet to be tagged. Please help me out if you believe a player, coach, or fan not yet tagged would enjoy the ride. I also plan on inviting and including Westminster coaches and players in December. This is, after all, a celebration of their season as well. So far I’ve made it a point to mention the pride the 1988 Roos have in knowing that their tremendous season could only be ended by an eventual national champion.

On December 12th, we’ll rest. Why? Because December 12th is the AC football sabbath. It’s a holy day for reflection and meditation. It’s the anniversary of Austin College’s NAIA D2 championship in 1981. Appropriate words will be written and photos will be shared, I’m sure. Maybe our friend Dwight will finally find that cassette of the Cobber call of the 1981 AC-Concordia game in his attic, and will send to me to sync with game film. Maybe others will stumble upon some 1981 gems in their own attic. If you are a Roo, there’s always something to say or share on December 12th.

Let’s call it the “12 Days of Roo Football Christmas”. Hope you’ll join us. Have a great Thanksgiving week, and we’ll see you on December 1st.

Members of the 1988 Austin College Kangaroos (send me corrections):